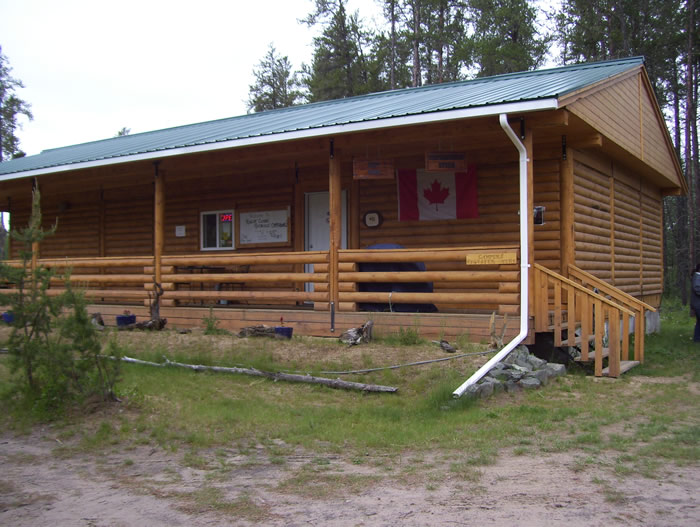 Dianne and Les Anderson envisioned a campground designed and built specifically for motorcycle riders. After travelling across Canada on their bike their suspicions were confirmed that that this type of service for motorcyclists was virtually non-existent.

They began their search for the ideal piece of property in 2005 and in 2009 they found it in Smoky Lake County they knew that their small business venture was finally going to happen.

Their work began determining the cost of creating the businesses. Roadways, campsites a shelter and a Store/Shower building would be required for the vision they seen. They had saved for many years with this project in mind but it just wasn’t going to be enough! After being politely refused by one of the major Banks they spoke to Mr. Paul Pelletier, General Manger at Community Futures and submitted a business plan for his consideration for financing their business venture. After the Board considered and approved the venture they were on their way!

The business is now in its third year of operations. Motorcyclists from as far away as England and of course motorcyclists from our vast Country as far as PEI have visited the campground. The comments have all been positive and as the third year ends prospects are good for success of their Business venture.

An annual “Biker Bash” is held in August as a fundraiser for the Fallen Rider Monument that will be erected in Two Hills, Alberta. This event not only recognizes the fallen rider but it provides an opportunity for motorcyclists to show off their skills on their rides in the rodeo! The evening entertainment is great and a good time is had by all of the campers in attendance and many new friendships are struck.

Howlin’ Coyote promotes the many beautiful lakes, museums, and other tourist attractions within touring distance from their campground. The campground boasts a country store for all the necessary food and camping supplies.  They have a horse- shoe pit and the store holds several other games that are available to registered quests for their enjoyment.

This summer the campground provided a venue for a very special couple as they said their special vows during their wedding ceremony hosted by Howlin’ Coyote. A small rainfall happened about an hour before the wedding but the sandy soil saved the day and the wedding went off without a hitch! They say a little rain on your wedding day brings good luck – ask Les and Dianne.

Les and Dianne continue to build the business. Marketing is crucial when starting a business like this when there are few examples across the country in which to model a new business. The success is dependent on the motorcyclists that visit the site and of course the media.

They are both involved in the local community groups and are always willing to lend a hand to make a venture successful. The Chamber of Commerce was the first group to benefit from their personal life experiences in the legal formation and the many ventures undertaken under the leadership of Dianne. They take an active role in community events not only to promote their campground but to encourage travellers to the north east sector of Alberta.

This unique business, like many others, comes with unique challenges and opportunities!  Community Futures was the one place where their idea was provided serious consideration and the organization was bold enough to finance a new idea and concept in tourism geared towards the motorcycle enthusiast!

Give us a call, send us an email, or drop in for a chat.